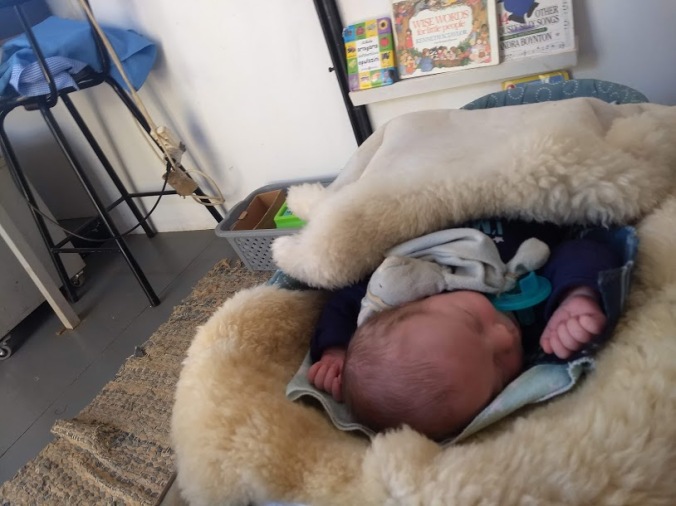 My view these days

Blessed are the efficient, for theirs is the Kingdom.

If you can’t tell, I’ve been wondering about this idea lately.

First, Jesus never said that. I think maybe he said several things to the opposite- things like the Kingdom is as small as a mustard seed, we cannot take the Kingdom by force… also he tended to say crazy things that scared lots of followers away, (like sell all your possessions, or embrace suffering). He took time for children, the ill, the social outcasts…generally not a very efficient guy.

But I’ve been wondering about this lately as I’ve been plunged into the world of full-time parenting. It made me think about Marx.

In his critique of capitalism, Marx talks about how the division of labour (which is so efficient!) leads to alienation for the worker. There are a couple of ways this can happen. When things are too specialized, you end up doing the same tasks repeatedly (think: assembly line flipping burgers), and your task becomes divorced from the outcome (think: it’s no longer about feeding people, making customers happy, making delicious food). You don’t have any meaningful impact or control on the outcome. You live and do your work in an abstracted state. You end up feeling like a cog in the machine; your brain switches off.

It’s important to notice there’s two parts to that— feeling divorced from the outcome of your work, as well as repetitive tasks. Philip Kain, in a 1993 journal article about Marx, alienation and housework, points out that this has led to a debate in feminist circles over the woman’s traditional role of childcare and housework. On the one hand, housework can be seen as incredibly alienating, since it is so repetitive! But on the other hand, mothering is an extremely embodied work — you are grounded in bodily interaction with your environment daily. You are daily interacting with the “outcome” of your work. Your work is meaningful because it meaningfully impacts the lives in your home (or “the species” as Marx would say). There are also endless opportunities for creativity and control –planting a garden, cooking food —even the way in which you order your time, or decide to go about cleaning (or not cleaning!) something. Embodiment pulls in the opposite direction of alienation, but in doing so, it also often pulls in the opposite direction of efficiency. After all, you are just one person. There is no way to change a nappy in the abstract, or to mass-produce a game of “pen car” (a current favorite in our house). Embodiment means limitations.

(Of course, all this labor for your own home and child is different than doing it as an employee, and especially different from doing it as a slave).

Jesus was kind of big on embodiment. He literally came in the flesh. Theologians call it the incarnation.

Baking and playing with pens … two very inefficient things which have taken hours in my day, but are quite satisfying.

I’ve been thinking lately about how so much of my paid work is done at a computer—whether teaching, or writing— and is incredibly abstract. It’s creative, but abstract.

I’ve been thinking about how sociology, and seeing individuals as part of systems is incredibly useful (and real!) but also… abstract.

I’ve been thinking about how I used to  judge people who wanted to come volunteer at our organization and “just hold babies” (first— we don’t do anything remotely like that! And second— please. It’s the height of privilege to think you can just come into a community and hold their babies and think you’re somehow changing the world).

And yet these past three weeks I’ve done nothing but hold a baby.  And play with a two year old. And cook them food. And it’s been the opposite of alienating and abstract. You do not have to practice mindfulness or staying in the present with a two-year-old. They demand you stay immediately present. You have to be grounded in physical reality. There’s no way for it to be abstract.

But is it efficient?

Could more be done for the good of the world if I paid someone to feed and hold my baby?

Maybe part of the desire in those volunteers to come and hold babies isn’t just their own privileged individualism speaking. Maybe some of it comes from a longing we all have in our information-driven, abstract world, where systemic oppression feels overwhelming, to do something embodied. To hold a human, a real human. And to know that somehow by holding this human, you really could make the world a better place.

4 thoughts on “Blessed are the efficient?”