This is a new guest post in the Hospitality Series. This one is on welcoming our Muslim neighbors, and comes from my friend Rachel. I love how she reminds us of the importance of putting aside fear to welcome those who are different, and her honesty in sharing from her own experiences. Definitely worth a read-through to the end!!

A couple of weeks ago a Christian friend posted on Facebook that that day four of her Muslim friends had been accosted in a grocery store parking lot in the USA. The accoster threw things at them and screamed at them to get out of his country. He said he knew they were terrorists because of the way they were dressed.

It wept because this isn’t the first time I’ve heard such stories. It wept because I wasn’t very surprised to hear this story—and stories like this ought to be surprising.

It wept because the fact that a woman covers her head does not make her a non-American. It wept because hijabs, niqabs, and abayas are Islamic—not terrorist—garb. There’s a legitimate distinction to be made between “terrorism” and “Islam”. Muslim leaders from around the world have denounced terrorism in the name of Islam.

Most of us have probably heard that before: “terrorist” ≠ ”Muslim”. At a certain level, it’s obviously true. Not all Muslims are terrorists, and not all terrorists are Muslims. I imagine most of you will agree: what that man did was wrong. Why need more be said?

Consider this: there’s a movement in the US to prevent Muslim refugees from entering our country. Advocates warn of a “Muslim colonization” of this country. On October 10, 2015), upwards of 20 anti-Muslim rallies have been planned outside mosques across the US.

Sure, there are fringe groups who do crazy things. But most of us aren’t going to participate in such extreme activities. So we’re off the hook, right?

A few facts might help put things in perspective.

“I could feel the difference after 9/11,” a Muslim friend once told me. “People looked at me differently. They were suspicious of me, afraid of me.”

“Everyone stares at me. It’s like they think I’m a terrorist,” another Muslim friend recently moved to an area of the US in which there aren’t many Muslims recently told me. That worried me, I told her, because when I see Muslim women I’m curious, because I want to get to know them, and hence probably stare.

“Don’t worry,” she told me. “People can tell the difference.”

A couple of years ago a Muslim friend told me that children were often scared of her when she wore the niqab. Once a preschooler pointed at her and shouted, “Daddy! It’s a ghost!” She wasn’t surprised. But she was surprised when the dad stopped, turned around, told his son that it wasn’t a ghost, and apologized to her. That apology meant so much to her that she remembered it years later. Being apologized affirmed her humanity, her dignity, her worth.

Being fearful does none of those things. God didn’t give us a spirit of fear, but of love, power, and self-control (2 Timothy 1:7). And yet, if we’re honest with ourselves, many of us—even those of us who wouldn’t throw things at Muslims in grocery store parking lots—would have to admit that Muslims make us uneasy, and perhaps even a tiny bit afraid. If so, I encourage you to reflect on the following questions:

Someone wiser than me recently told me that he thinks most Christians who fear Islam actually fear pluralism. I think he’s onto something. You need not be a pluralist to welcome your Muslim neighbors. In fact, many of my best conversations with Muslim friends have happened because neither of us were pluralists, and we talked through the differences of what we believe 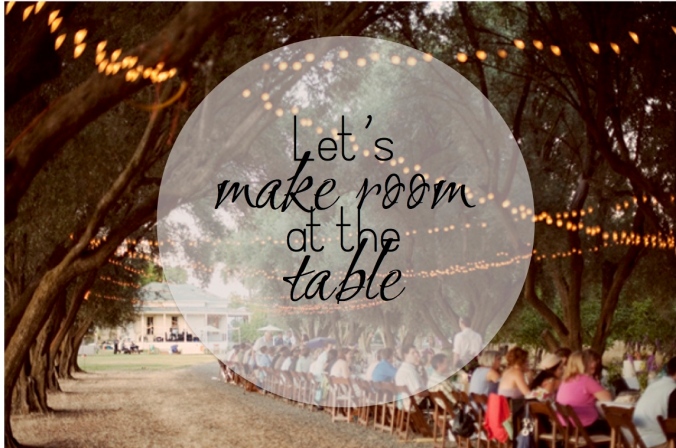 I know a church which decided to meet its Muslim neighbors. So, some of them went to the mosque and introduced themselves. The Muslims were astounded. “We’ve been here for more than two decades,” they said, “and this is the first time any non-Muslims came here to introduce themselves.” Members of the church and mosque started meeting together periodically to share meals, learn about their respective faith traditions, share their experiences of God, and develop friendships.

I can hardly think of a better way to love in a way that overcomes fear.

I realize that many of us aren’t in positions to begin a mosque-church alliance right now. (I’m not.) But in light of the Islamophobic climate, there is a need to do something rather than nothing. So what can you do as an individual? I imagine you’ll be better at answering that question than I will.

Determining appropriate ways to be welcoming can be tricky. On one hand, given the climate of Islamophobia I want to make the most of opportunities to build bridges when I meet Muslims. On the other hand, I don’t want to exacerbate social distance by singling out and approaching women exclusively because they’re Muslim. I don’t want to box my Muslim neighbors in and presume I must relate to them in a distinctive way because they’re “other”.

Two weeks ago I went to Goodwill on a Sunday afternoon and came across two Palestinian Muslim women and their children. I wanted to find a way to introduce myself, but no obvious “ins” to the conversation presented themselves. They were finding clothes and checking prices, and I felt like butting in to introduce myself would be more objectifying than humanizing. So, I did nothing. I kept thinking about what my friend had said: people can tell the difference between a curious and suspicious stares. I hoped the same applied to initiating conversations.

Afterwards, we crossed paths again in Aldi. Still, I couldn’t think of any natural ways to strike up a conversation. Finally, after we had both checked out, one of the women sat down near the exit and heaved a sigh. “Tired?” I asked her. She smiled, nodded, and went back to talking to her children. And that was the end of that.

“Well, so much for that,” I thought as I left. My attempt to strike up a conversation had flopped.

But just because the conversation flopped doesn’t mean the attempt did. I think—at least, I hope—there was still something valuable in that.

Rachel Jonker is a philosophy graduate student at Notre Dame University in South Bend, IN. (She did her undergrad at Taylor University, which is where I got to know her thoughtfulness and wonderful personality :D).

One thought on “Hospitality series: On Welcoming Muslims”