“What are some hopes and goals you’re setting for yourself as you go into this week?” Sizwe asked all the volunteers from Hilton and Pietermaritzburg gathered for Holiday Club Training this past Monday. As I’m now a “one-day-a-weeker” at the moment with iThemba, David and I were thrilled with the chance to get to help out with the 3-day ISHIBOBO Holiday Club in Sweetwaters. YAY! Playing with kids, my favorite! (*Ishibobo- a Zulu word for the soccer move when you kick a ball between someone else’s legs).

A few people shared really good things. Then there was that awkward pause and, because I can’t stand those, I tried to think of something quickly. “Um, I’d like to notice the kids on the edge who are shy or not really involved in the games and try and include them.” Woah. I impress myself sometimes with how fast I can think. That’s why I did so well in school. 🙂

I know I said that was my goal, but it’s sometimes fun to see how God holds you to what you say, even when you say it flippantly. When we got to our venue (iThemba ran the club simultaneously at two different venues this year), there were over 350 kids. Crazy. Fun. Exhausting. Did I say crazy?

The soccer-themed games worked really well, though and while it’s a challenge to get 350+ kids to sit and listen, they were pretty well-behaved for the messages about “being chosen for God’s team” and “following Jesus as our coach” and “using your gifts for God’s team.” 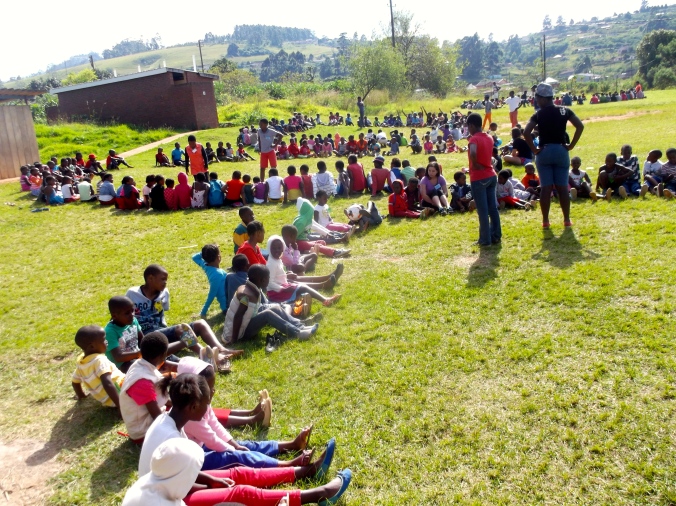 Kids sitting in their four groups to play a ball game

But God kept reminding me to “look out” for those on the edges. I guess I thought I would be like Jesus or something, noticing those being left out… you know, be a blessing and all that. But of course, the person sitting on the edge was more of a Jesus to me than I was to him.

I’ll call him “Sam”– he has cerebral palsy, so he can’t do the active games like all the other children can. He would come and sit next to me and help hold the camera, or give hi-fives to the kids who finished their relays. He attends a school down in Pietermaritzburg, so we only ever see him at Holiday Club events. I knew who he was, but I had never spent that much time with him. I’d heard from other volunteers and staff members about what a light he was to them, and now I’ve experienced it myself! His huge smile, and the way he brought out the best in the other kids was so inspiring. Kids would slow down to help him, or pause to give him a high-five, or wave hello as they ran past. Everyone knows him. Everyone smiles when they see him. And I got to spend 3 days hanging out with him.

I don’t know if Sam knows Jesus. I hope he does. But he really showed Jesus to me. 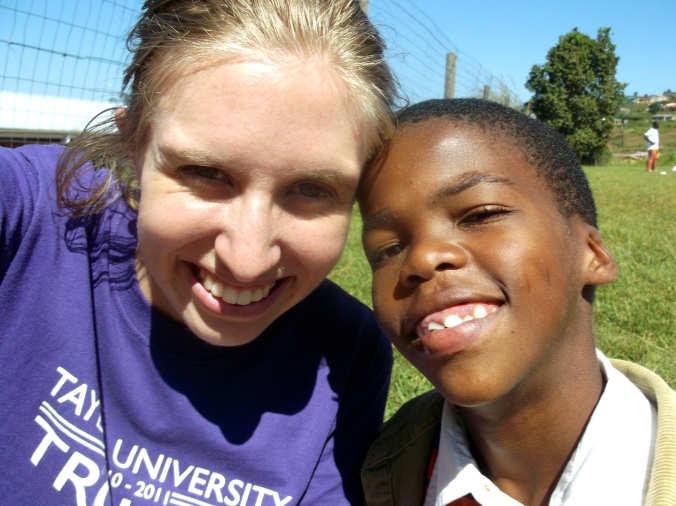 Pray for the new Saturday Kids Club that is starting up at this Holiday Club Venue, where kids can come every week to hear about Jesus and have fun together!

One thought on “ISHIBOBO Holiday Club”